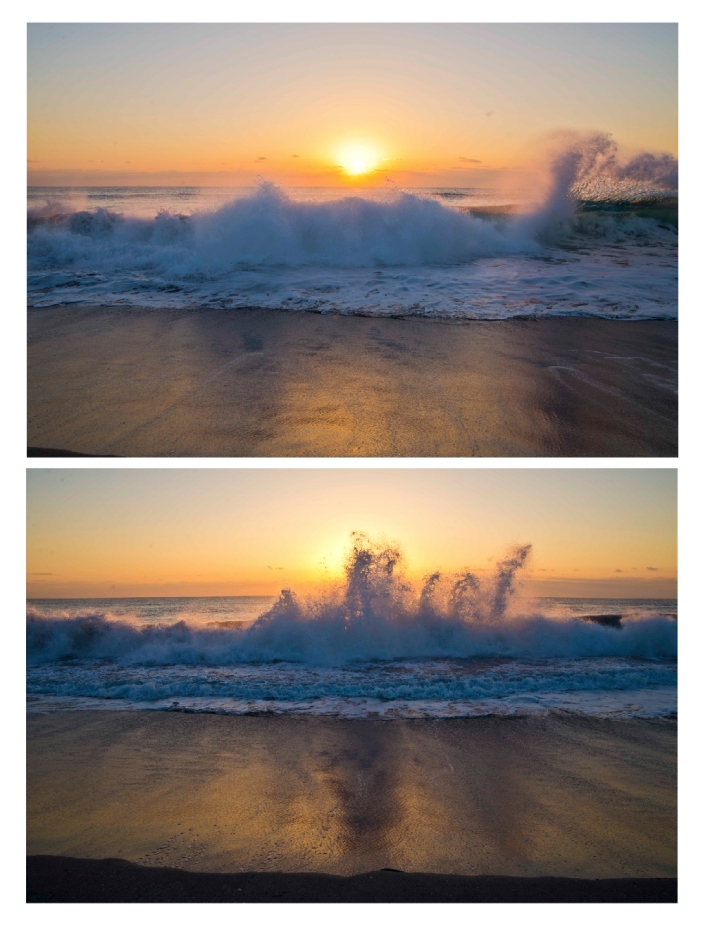 We pushed it off until our last morning at Del Ray, but we finally woke up before the sun in order to go to the beach to watch it rise over the Atlantic! It was gorgeous. It was so serene being on the coast that early in the morning.  It was before the town had waken up to go to work, and before the birds had come out to sing, and before cars were zooming by on the highway.  It was just us, the ocean, and the warm sunlight slowly peaking over the horizon. All we heard was the crashing of the waves against the shore, and as you can see, some of them crashed pretty hard.  We were standing right on a bank above where the ocean had chipped away at the loose sand and so we were about a foot and a half above the tide but every once and a while with the big waves, the water would come up and crash over the bank we were standing on.  One time the water even came up and swallowed my flip flops and if it weren’t for Justin quickly grabbing them before they got pulled into the sea, they would be half way to the bahamas by now. I was more worried about the salt water splashing up against my camera as it sat on its tripod. We had gotten there about a half hour before the sun rose so I had some time to set up my camera on the tripod and figure out my exposure.  I then just sat there with my remote shutter release and just snapped away, occasionally checking the exposure, and just watch the sunrise with everyone else. It was really neat seeing the transition of the day into night once again as the light from the sun filled the sky. People started waking up and going to work, the birds started chirping, and the noise of the crashing waves was joined by the motoring of cars as the passed by on the highway. 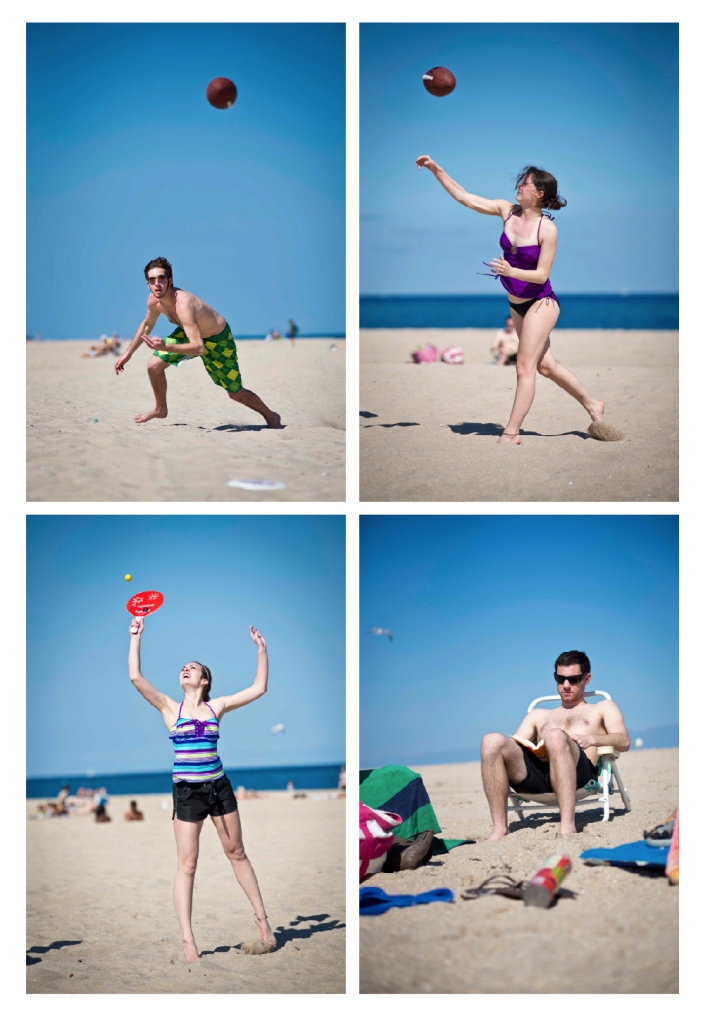 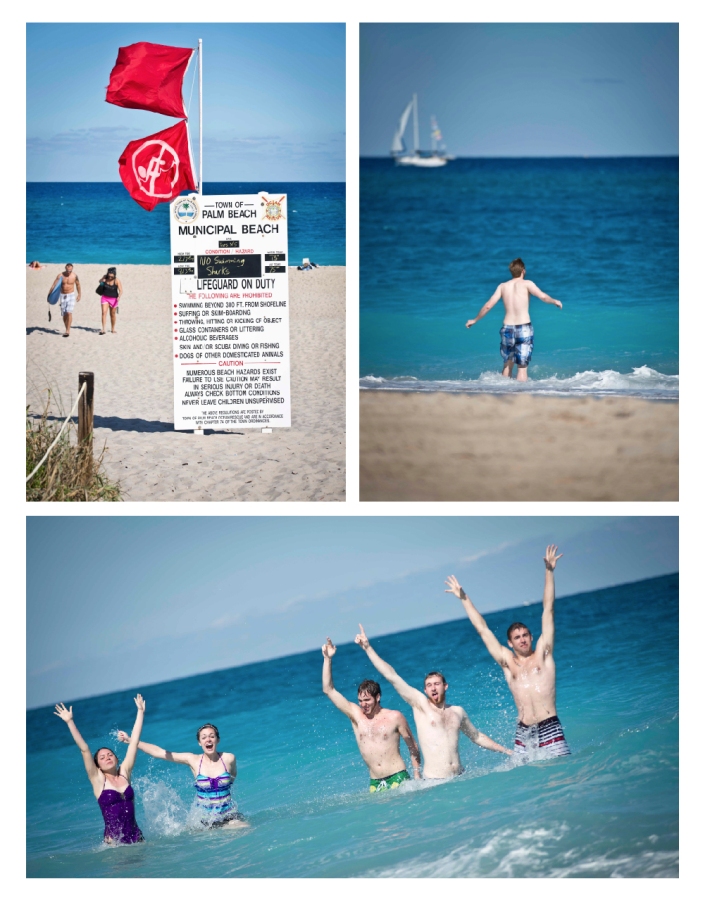 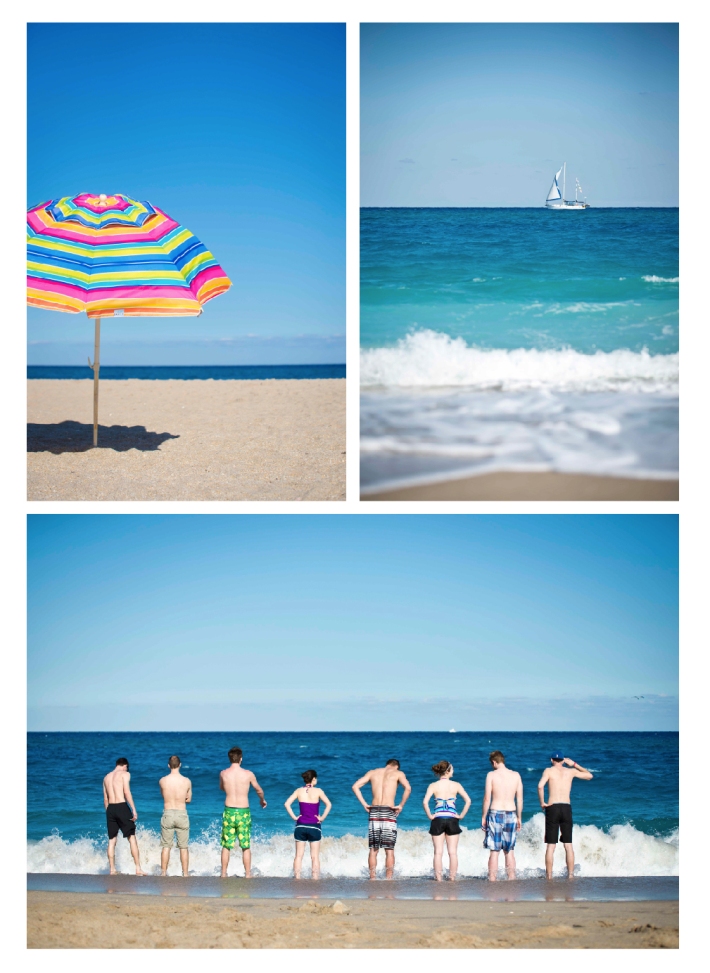 West Palm just made it to one of my top vacation spots of all time! It was a beautiful city with lots of classy buildings buildings right along the beach and seemed to have avoided the tourist trap of lining the beach with all of those trashy, loud, obnoxious shops. The beach was really well maintained and had the bluest water I have seen all trip. The roads were lined with tall palms and my favorite part was the sidewalks littered with rustling lizards. We met up with a few friends from Cedarville there so I took the opportunity to capture more of the people we were with and the activities we did. I also took a little journey around the beach searching for some big lizards to capture. The one you see here was the biggest one I saw! He was about 6 inches long before the tail and he was very cooperative. You may even notice he has a stub of a second tail from where he may have evaded a capture. As you can see in one of the pictures, the water was actually off limits because of an earlier shark sighting just about 10 yards of the shore. That meant we were swimming at our own risk if we went in the water beyond the life guarded region, and fortunately we all returned with all of our limbs. Overall it was just a very relaxing day at the beach and te weather was just perfect. It was in the low 70s with a nice little warm ocean breeze to cool us down. We all got some good reading done as well as played some paddle ball and even jumped some waves and all got some good sun. After our time at the beach we went to this very nice urban village in town to get some food at the Mellow Mushroom.  This was one of the coolest themed restraunts I have been to. It’s a really neat pizza franchise that themes every one of its locations differently. This one opened up just six weeks ago and they left the theme in the hands of three artists who had two weeks to paint the place. It had a very abstract, trippy, colorful vibe to it which made it really fun. I took a few photos here which I will use on a restraunt review that I will do later on, but overall it was a sweet dinner there! Then we walked around more of the urban village center checking out some of the interesting shops and grabbed some ice cream. There were a few fountains outside and fortunately I had brought my tripod so I broke it out and tried a few night shots of the shopping center. I had been itching to get my new d600 out to take some sharp night shots with its full frame sensor! West Palm was great and I hope I end up there again some day! 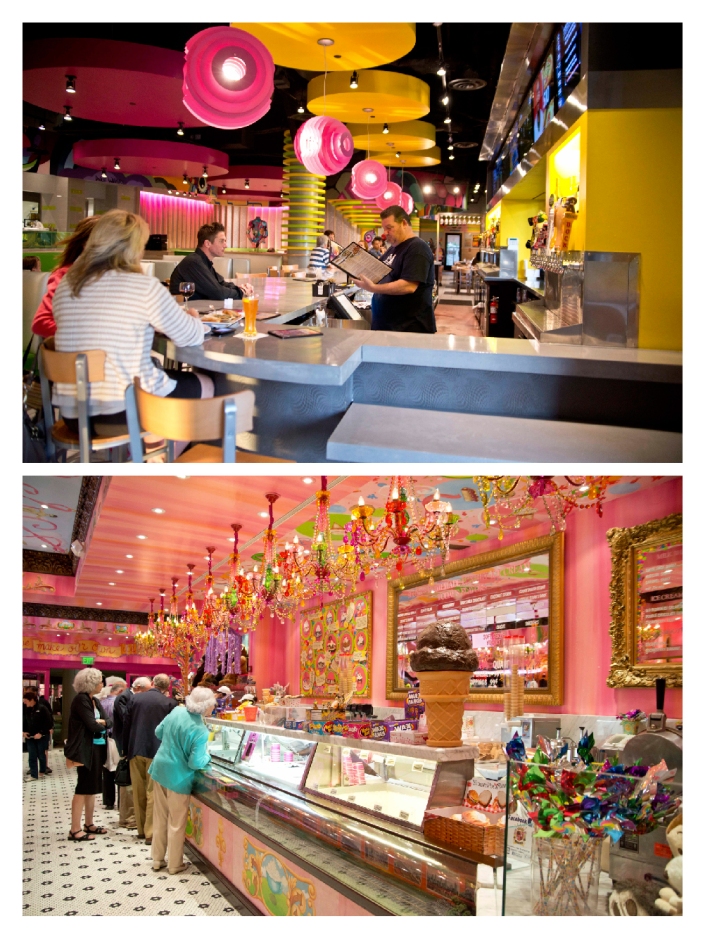 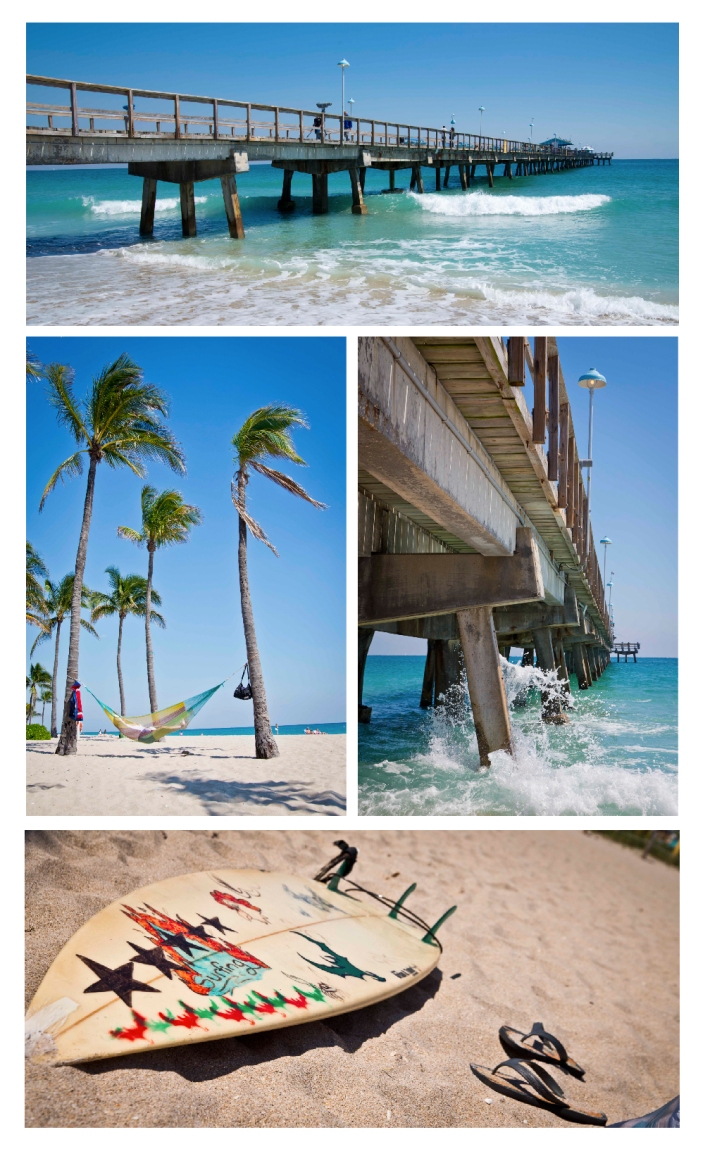 Aimlessly exploring towns is one of my favorite things to do.  Whenever I travel, I love to see the main tourist sites, but i also love to go off the beaten path a bit and see what everyday life is like for the locals. I love different cultures and I love just witnessing them and contrasting how different some people’s ordinary life is from mine. Yesterday I had the opportunity to do this in Fort Lauderdale.  After we went to church in Miami, we stopped in Fort Lauderdale to grab some lunch.  I wasn’t quite hungry yet and figured that rather than eatting in a neat little coastal town like this, I would rather walk around the town and see what life was like there.  My journey ended up taking me to the beach. Here I saw a few surfers who were just enjoying the afternoon by riding a few waves in. There were also a few skim boarders who would try to catch the tail end of the wave before it receded back into the ocean.  What an extremely chill way to spend the afternoon.  There were also a few families enjoying the sun together with picnics and playing paddleball.  One man even found the luxury spot of sprawling out in a hammock suspended between two palm trees, the epitomy of rest and relaxation.  Another man was scouring the beach with his metal detector trying to find any lost treasures that fell out of the pockets of casual beach goers. One last man I met was a Jamaican man.  He was visiting some family there and he was complaining about how cold the 70 degree weather there.  Of course that was extremely warm for me compared to the 20 degree weather we had left in Cedarville, but definitely cold compared to the 90 degree weather they had had a week prior.  He actually helped me out with a few shots.  I was having fun shooting this very tame group of sea gulls right along the waters edge but I wanted to get some action out of them. So I had my jamaican friend gently throw some shells  at the gulls just to get them to stir a little bit.  He did a great job and gave me the opportunity to catch some great detail of the birds in action.  Gulls may be annoying but they really are quite beautiful birds contrasted against the deep blue water.  Over all it was a great afternoon for catching Fort Lauderdale in action from the surfers to the gulls. A peaceful Sunday afternoon.

14 hours was all it took of straight driving through the night to make it to Daytona for the sun rise. And to be honest, the sunrise was kind of disappointing. There was very thick cloud cover, and the clouds didn’t absorb the colors of the rays as much as they just blocked the sun completely until all of a sudden it was light out. There were a few strokes of brilliant color, but not enough to really compose a very dramatic scene. I was really excited about this shoot because it was one of my first experiences with my brand new Nikon D600. In fact, the extra hour we had between arriving in Daytona and the suns expected arrival, I couldn’t even sleep, but instead messed around with some of my camera settings to make sure I was as prepared as I could be during the short window of time that was the sun rise. Before the sun rose, I was even able to test out some of the capabilities of my camera in very low light situations. The first shot you see here was one that just made me know I made the right decision to upgrade to a full frame sensor as soon as I could. I shot that at ISO 400 with f/5.0 and shutter speed of .3 s on a tripod. I was also able to experiment with the mirror lock up and remote shooting settings to reduce camera shake even more. I was just blown away when I saw the result in the viewfinder. Soon after, the sun began to rise and so I went and focused my attention on trying to grab those colors, But as I mentioned, unfortunately the colors weren’t as stunning as I was hoping, However, the phenomenon of seeing the world turn slowly from night into day was an amazing experience. That led me up to the pier to see all of the early morning fishermen who were trying either catch their lunch or catch their living off the pier of the boardwalk. There were both professionals and hobbyists up there and they were catching quite a few fish. It was really awesome capturing these men in there environment just doing something they were passionate about and in such a cool setting. The best part about this photo outting was that I was done by about 7:30 and still had the rest of the day to do stuff in Daytona and Orlando such as check out a local coffee shop, visit the Daytona speedway, visit Full Sail University, visit Relevant Media Groups headquarters and talk to one of my biggest role models, Cameron Strang, go thrift shopping, check out a few of Orlandos finest malls, and finish of the day by watching my first ever live NBA game in the Amway center (and all of this was done on less than an hour of sleep). This break has been incredible already and its barely just begun. Most of my friends haven’t even arrived in Florida yet! 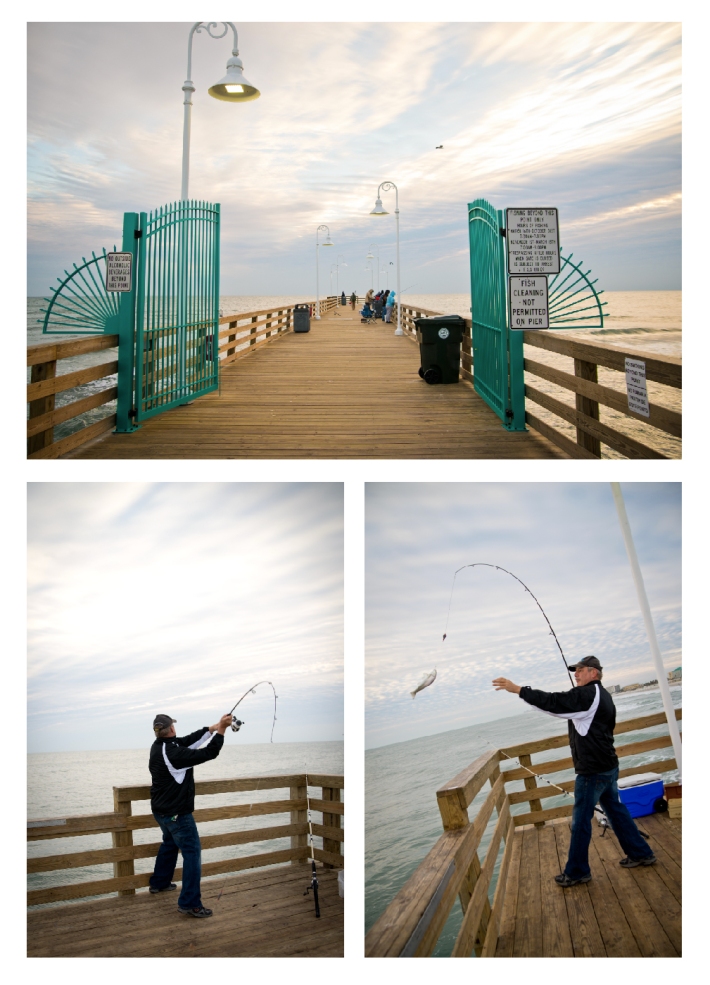 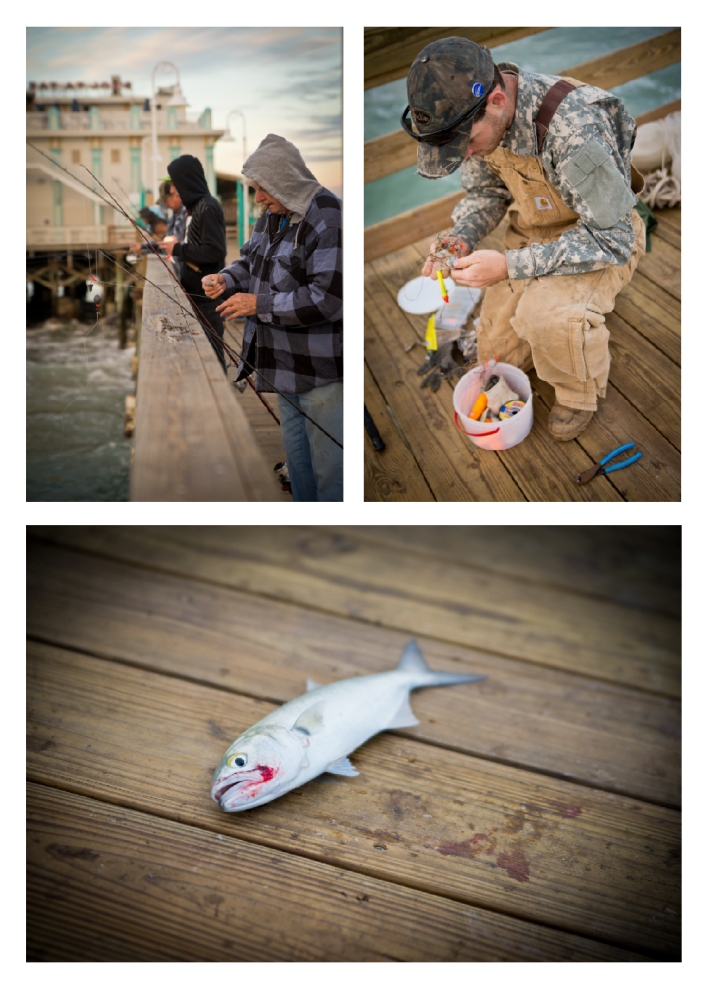